In California, Automobile Accidents happen frequently. Further, many workers use motor vehicles to both commute to work, to travel as part of their jobs to various locations, and employ them during their break times, i.e. lunch. Accidents that occur during these events may be considered as industrial and entitle the Injured Worker to obtain workers’ compensation benefits and protections. In a California Highway Patrol Report, in the year 2014, there were 3,126 persons killed, 230,904 persons injured, 2,882 fatal collisions, and 162,742 injury collisions that occured in California as a result of motor vehicle accidents. A considerable amount of these accidents were work-related.

If the Accident was the Injured Worker’s Fault, Can They still pursue a Workers’ Compensation Claim?

If the Accident was either “going to” or “coming from” work, Can an Injured Worker File a Workers’ Compensation Claim?

Maybe. There is a “Going and Coming” Rule in Workers’ Compensation. This rule, in general, provides that recovery under the Workers’ Compensation Act is barred for an injury suffered during the course of a local commute to a fixed place of business at fixed hours in the absence of exceptional circumstances. (Hinojosa v. Workmen’s Comp. Appeals Bd. (1972) 37 C.C.C. 734). There are various exceptions to the rule. They are factually dependent. Consultation with an attorney to make an analysis should be done.

One of the classic exceptions to the “Going and Coming” Rule is the case of the employee being injured while making a left-hand turn into the employer’s parking lot. It was considered industrial and the Injured Worker was entitled to claim benefits. (See Greydanus v. IAC (1965) 30 CCC 376).

If the Accident was in the Employer’s parking lot, Can the Injured Worker File a Claim?

Maybe. These type of accidents are factually dependent. Consultation with an attorney is recommended. 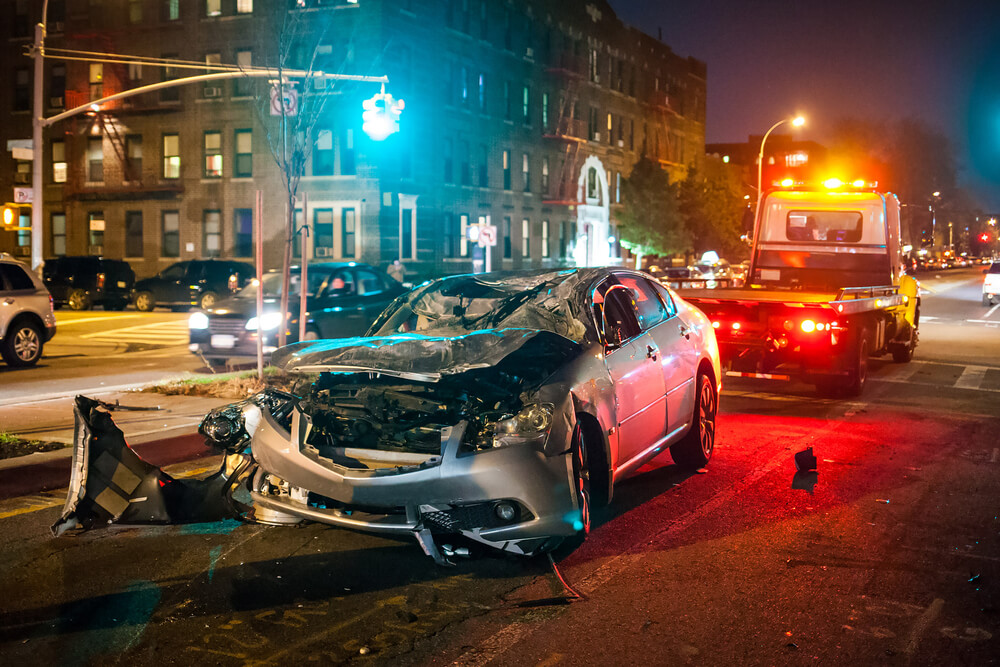 If the Accident was during a break or a lunch break, Can the Injured Worker File a Claim?

Maybe. This type of claim require a factual analysis as well. Consultation with an attorney is recommended.

What happens if the Injured Worker gets in an accident with another company vehicle?

If this is the case, most likely, the claim will be limited to Workers’ Compensation. This is the case because there is no “Third Party” responsible. If the Injured Worker, at the time of the accident, was not considered working at the time, a Personal Injury claim may be indicated against the employer.

Besides Workers’ Compensation, Are there any other claims that can be made?

Yes. Depending on the facts, a car accident can give rise to a variety of legal avenues to seek benefits. A claim may be made against the Party that was “at fault” in the accident. This would be a Personal Injury Claim. Also, there may be an Uninsured Motorist or Underinsured Motorist Claim as well. Finally, if there was a criminal act involved the Victim Compensation Board from the State of California may pay benefits.

Is it possible to pursue both a Personal Injury Claim and a Workers’ Compensation Claim at the same time?

Yes. You are allowed to pursue both claims at the same time. There may be credits for a recovery in one case against the other, however.

What is the difference between a Personal Injury Claim and a Workers’ Compensation Claim?

Workers’ Compensation pays fixed benefits to Injured Workers. It does not compensate Injured Workers for pain and suffering. It focuses on providing compensation for lost time at work and diminished capacity to compete in the open labor market. It does provide for lifetime medical care and it provides protections against discrimination as a result of the injury. If there is no buy-out, payments will be made over time. Also, medical treatment is subject to the rules within the Labor Code which include Utilization Review. Personal Injury Claims, on the other hand, seeks compensation for pain and suffering as well as economic damages. Further, the Personal Injury claims are generally paid out in a lump sum.

Are there differences between recoveries in Workers’ Compensation and Personal Injury?

Yes. Personal Injury Claims may be limited by Insurance Coverage and the wealth of the person or entity responsible for the accident. Workers’ Compensation insurance is capped as to how much can be paid out in accordance with the labor code. Depending on the circumstances, the recovery may be better in either one. Each case if different with respect to this analysis.

Yes. Motor vehicle accidents going to or coming from medical treatment are most likely to be considered as a workers’ compensation claim. This is important especially if the Injured Worker was “at fault” in the accident and no personal injury claim is possible.

If I get into a Car Accident and I believe it may be Work-Related, What should I do?

Consult an Attorney immediately. Each accident has its separate facts that need to be analyzed. There are many times that an in depth interview with the Injured Worker can reveal facts that may make the matter an industrial event. Personally, I recommend consulting with a Workers’ Compensation Attorney first. The reason being that a Personal Injury Attorney may not be able to identify a nuanced Workers’ Compensation claim.

If you would like a free consultation regarding workers’ compensation law, please contact the Law Offices of Edward J. Singer, a Professional Law Corporation. They have been helping people in Central and Southern California deal with their worker’s compensation cases for 26 years. Contact us today for more information.